Casa SE is a two storey modern house for a family located in Zapopan, Mexico. It was designed by Elías Rizo Arquitectos.

“Casa SE was built in a traditionally residential quarter located in the western parts of Guadalajara. It was commissioned as a permanent home for a family of 4 adults. The primordial drive behind the project was to create comfortable spaces and to allow them to establish their own dialogue with the outside through a series of private terraces. The program is accommodated in two levels, with the first floor encompassing the public areas of the house, and the second floor containing the dormitories and various terraces. The prevalence of windows throughout the envelope allows a great deal of daylight to flood the interiors.
The main façade of the building includes a wide gate that grants vehicular access, as well as a pedestrian entryway which opens up to an outdoor transitional passage defined between two wooden doors. The entry foyer presents another door, which opens to a small studio, and reveals a path of access towards the public cluster located on the first floor, which includes the kitchen, living, and dining areas. This cluster stretches along the back edge of the house and looks out to an ample garden that is accessible through a series of sliding windows.
The second floor includes four bedrooms, each with its own bathroom, a TV room and a series of elevated terraces that serve each room privately. Vertical circulation between the two levels is granted through a stair that is conveniently located at the central area of the house. The stairway is articulated as a cascade of thin stone platforms and is flanked by a wooden railing that follows the staggered rhythm of the steps at its base. This central space is lit by an elongated skylight which filters daylight through a series of louvers.
The material palette is fairly neutral and austere. Marble stone covers the floors throughout the various public areas and bathrooms; it is replaced by wood inside the dormitories. A light grey color paints most walls within the house and contrasts with the stark grain of the tzalam wood panels on closets. A special emphasis on detail and craftsmanship can be seen throughout the various areas of the building. This is especially evident in the manufacture of the operable metal screen that frames the main façade, as well as in the meticulous construction of the stairway.” 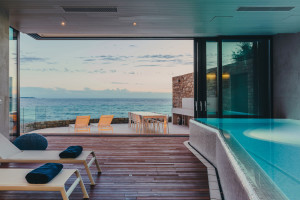 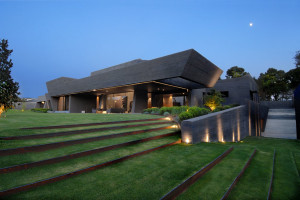 Concrete House II is a single storey building with a[...] 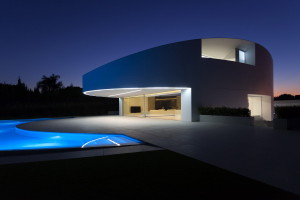 Balint House is an elegant family residence designed by Fran[...]