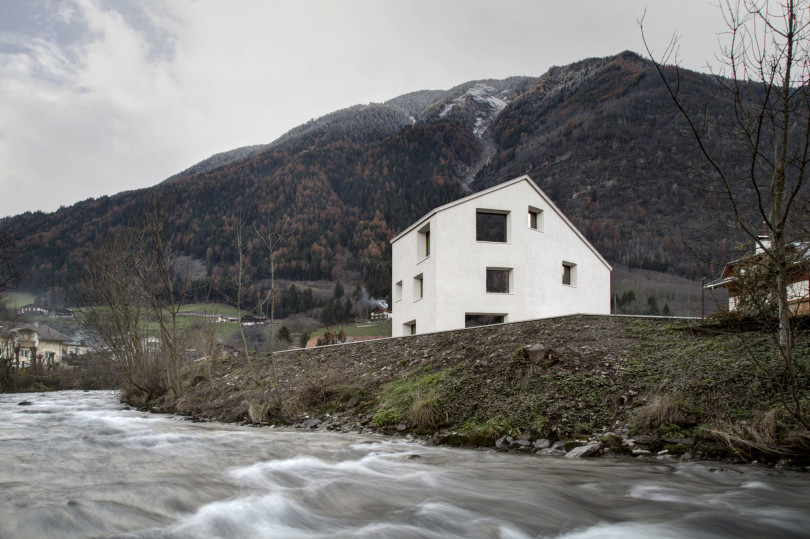 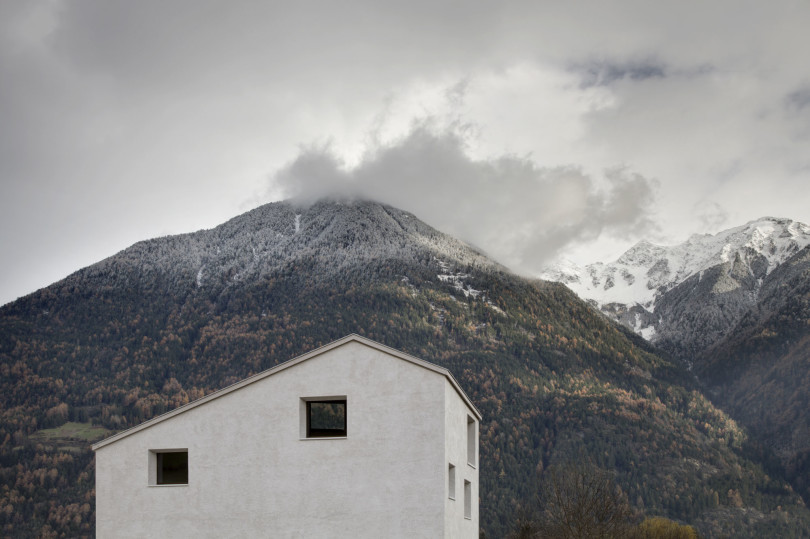 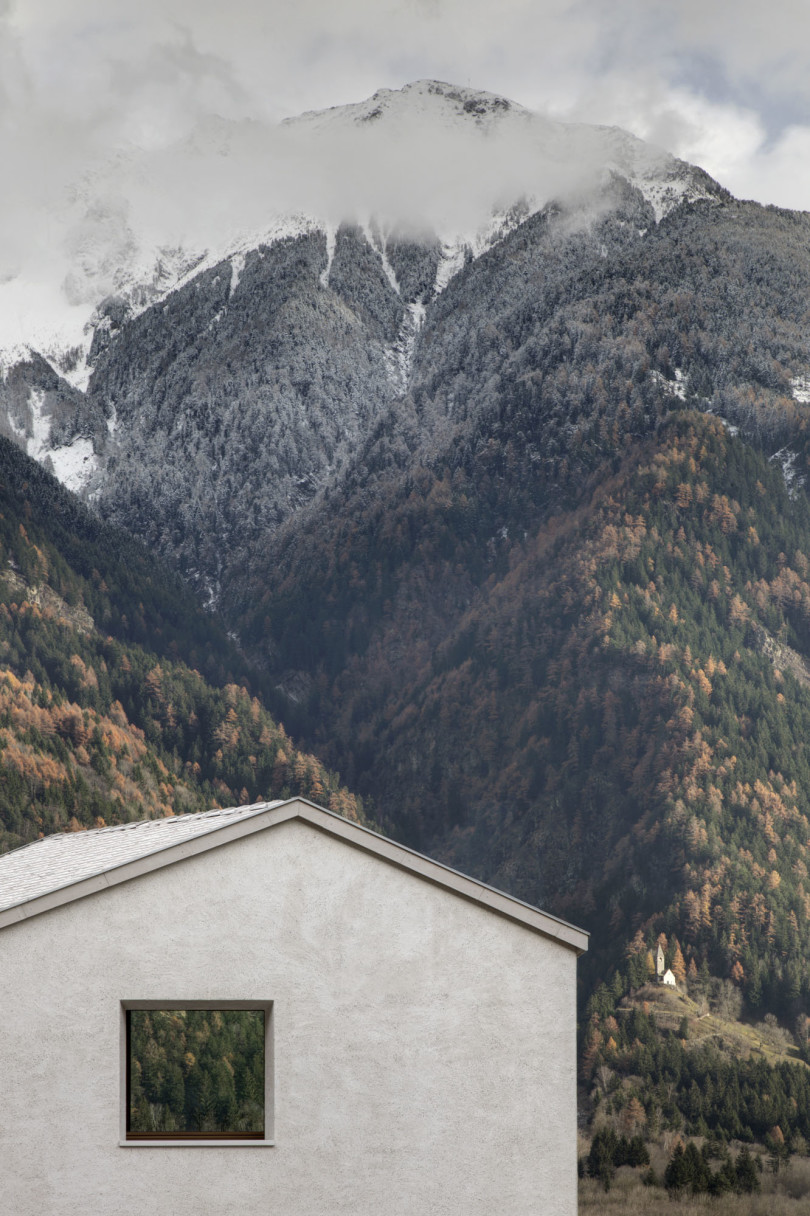 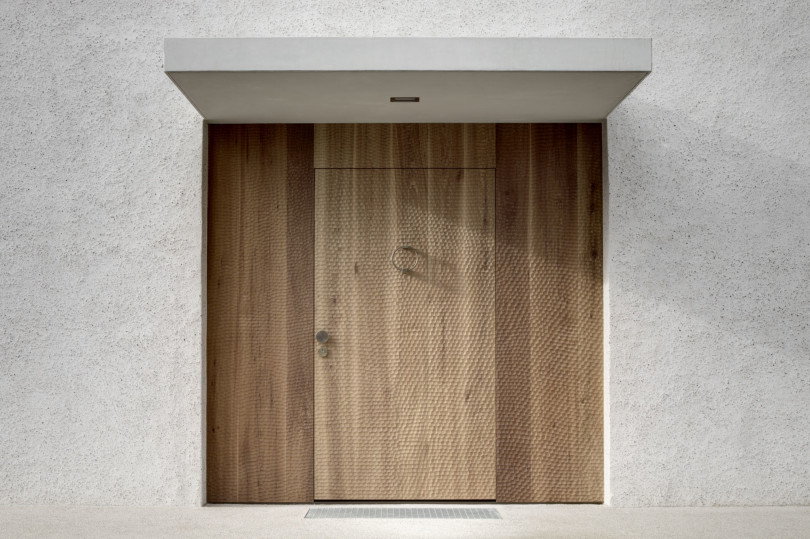 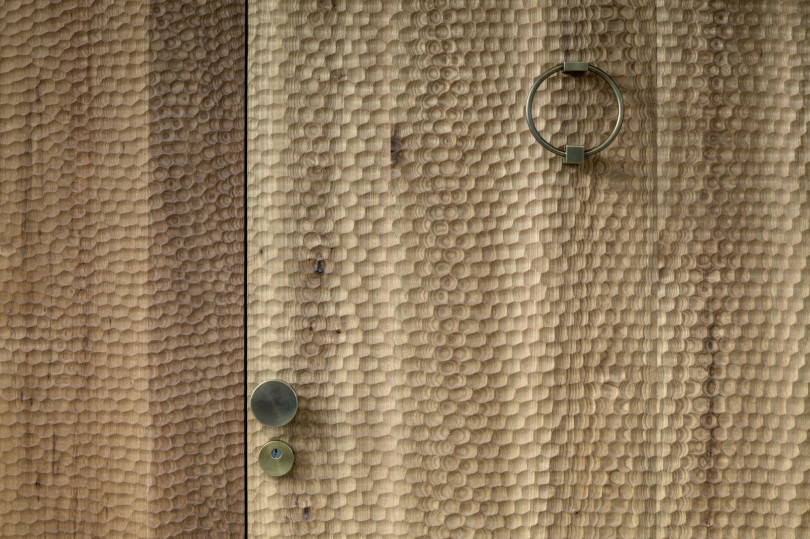 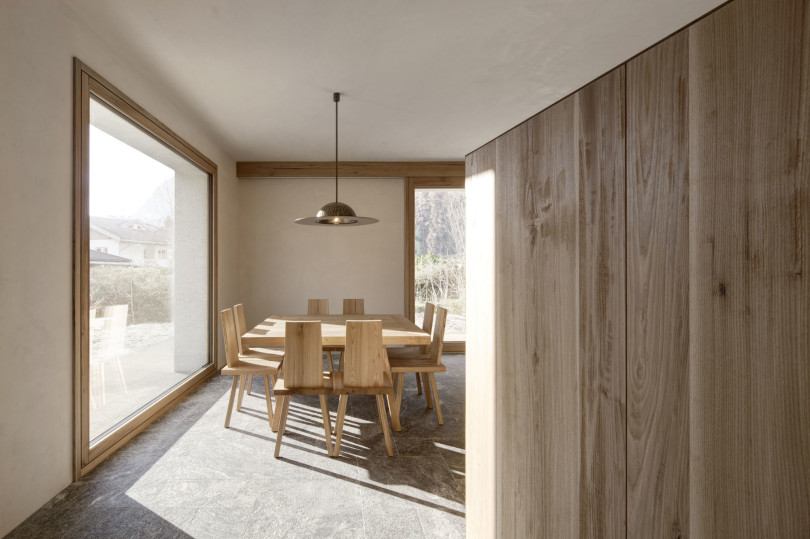 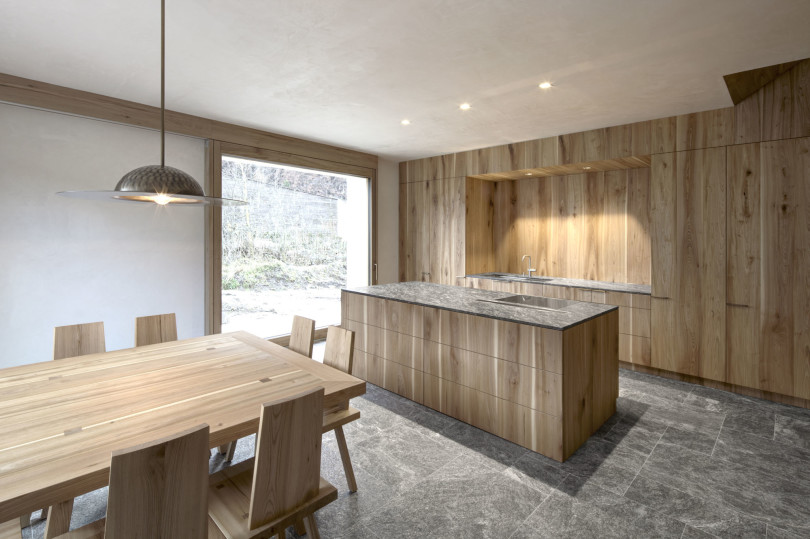 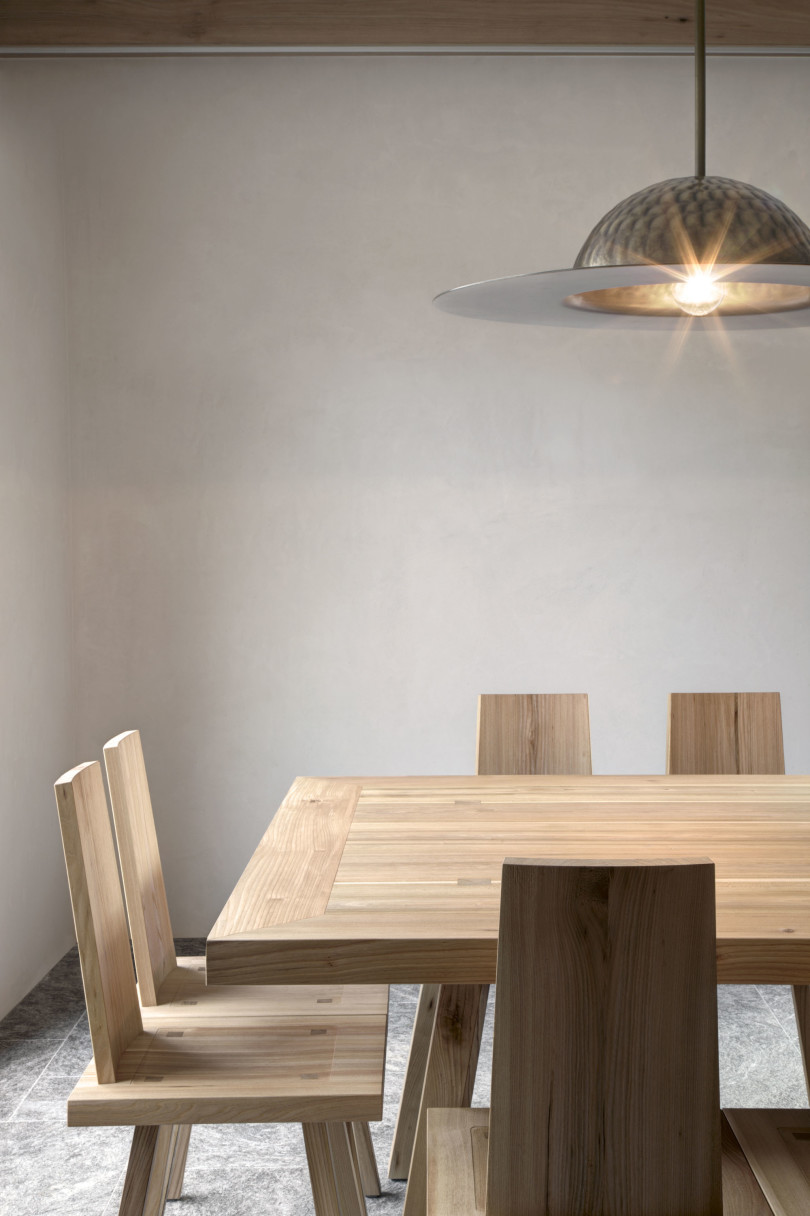 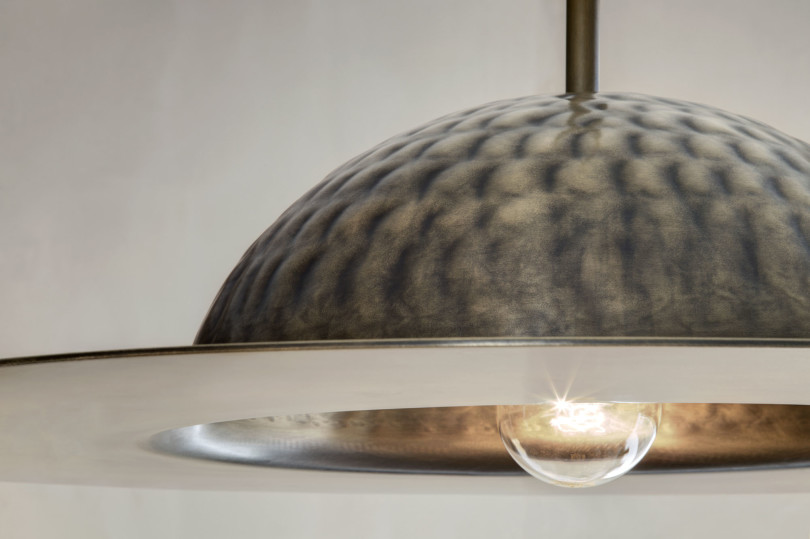 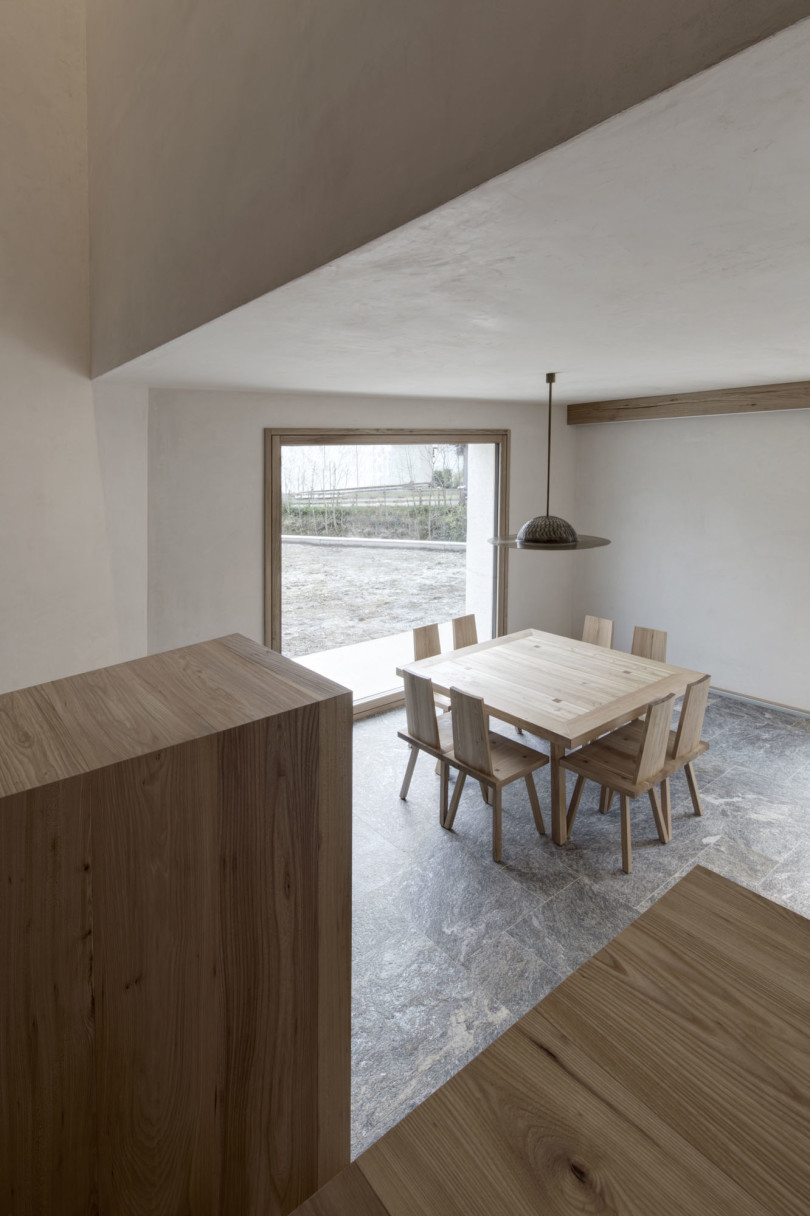 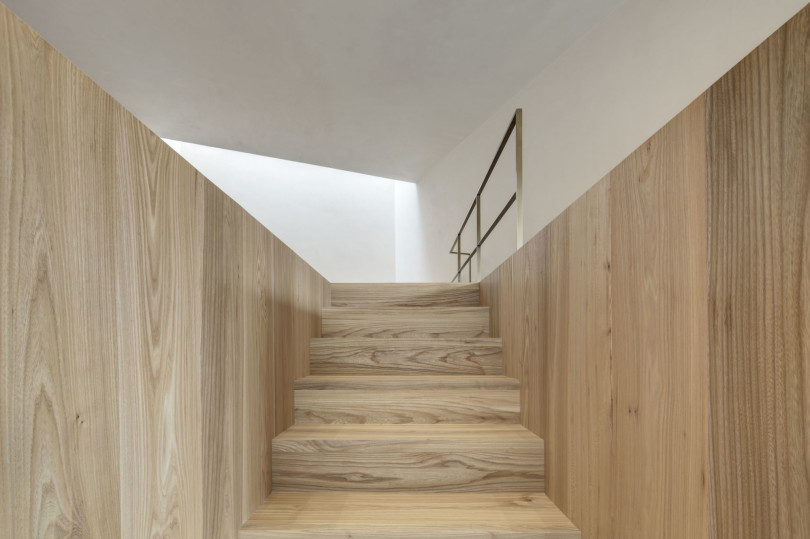 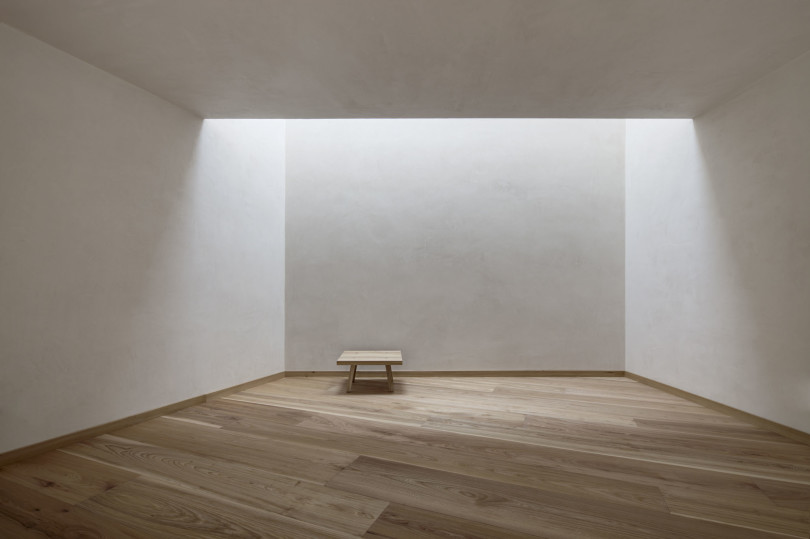 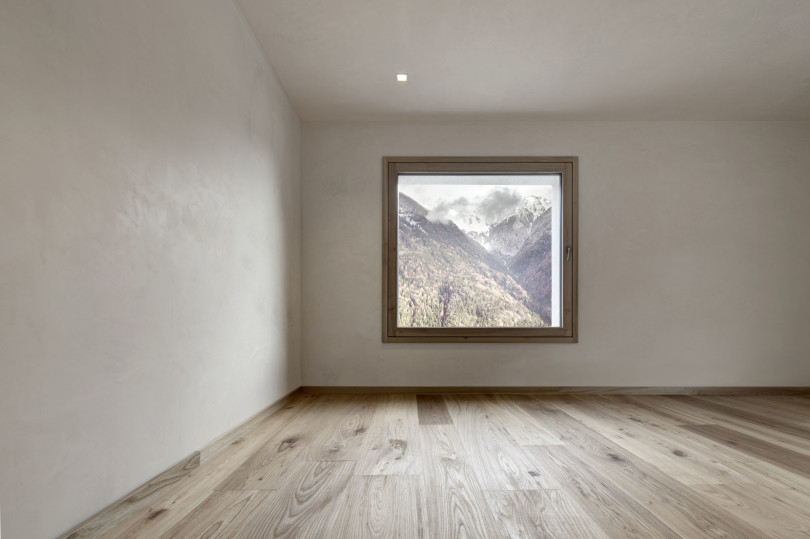 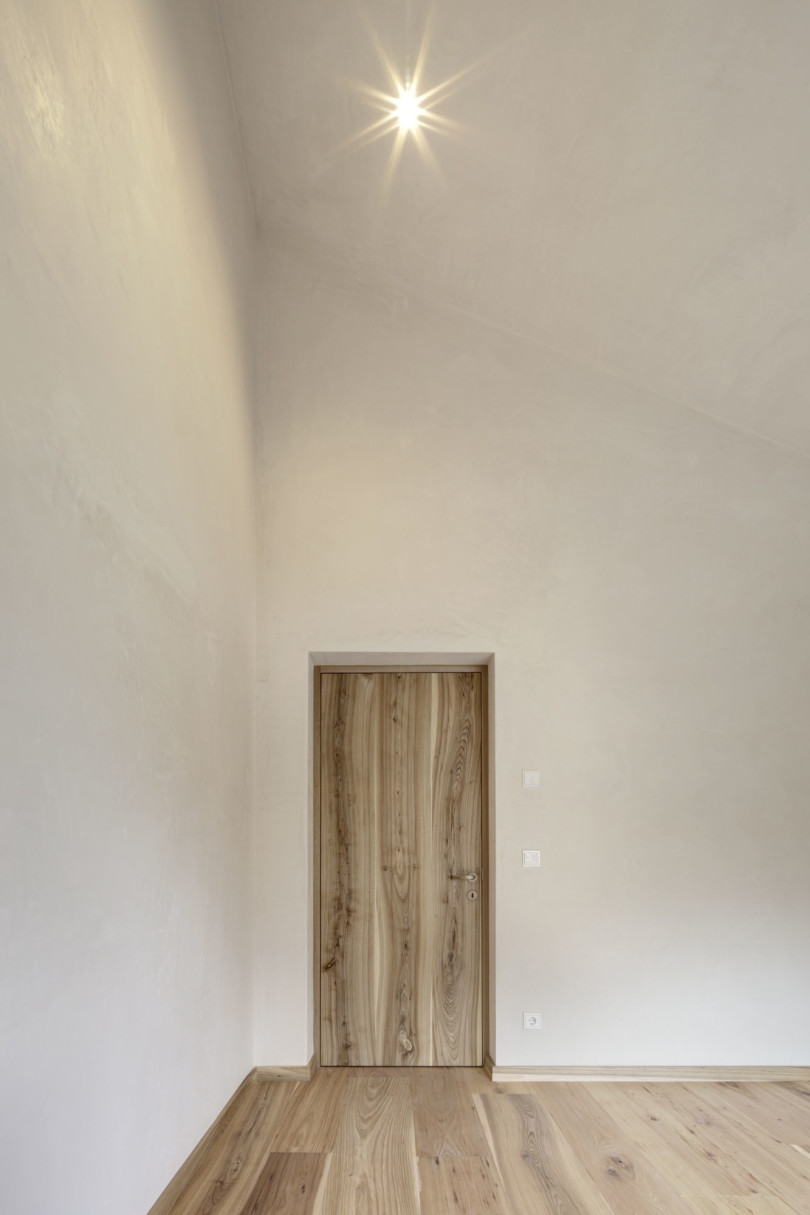 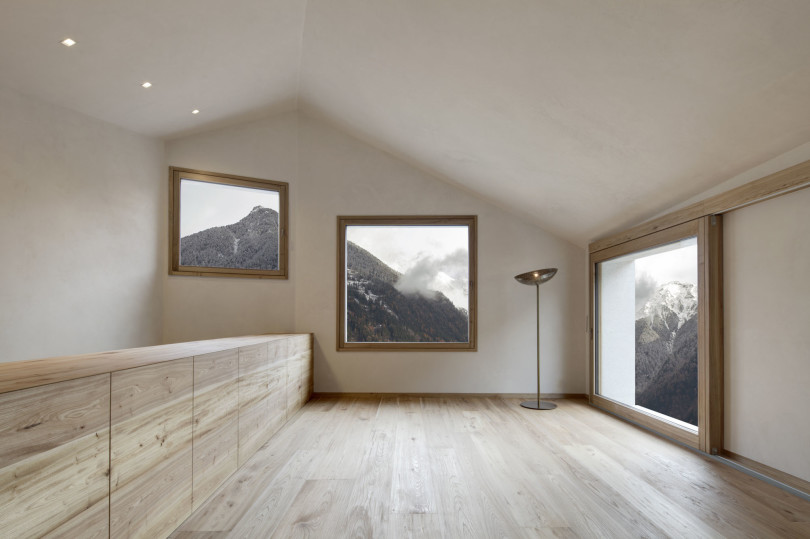 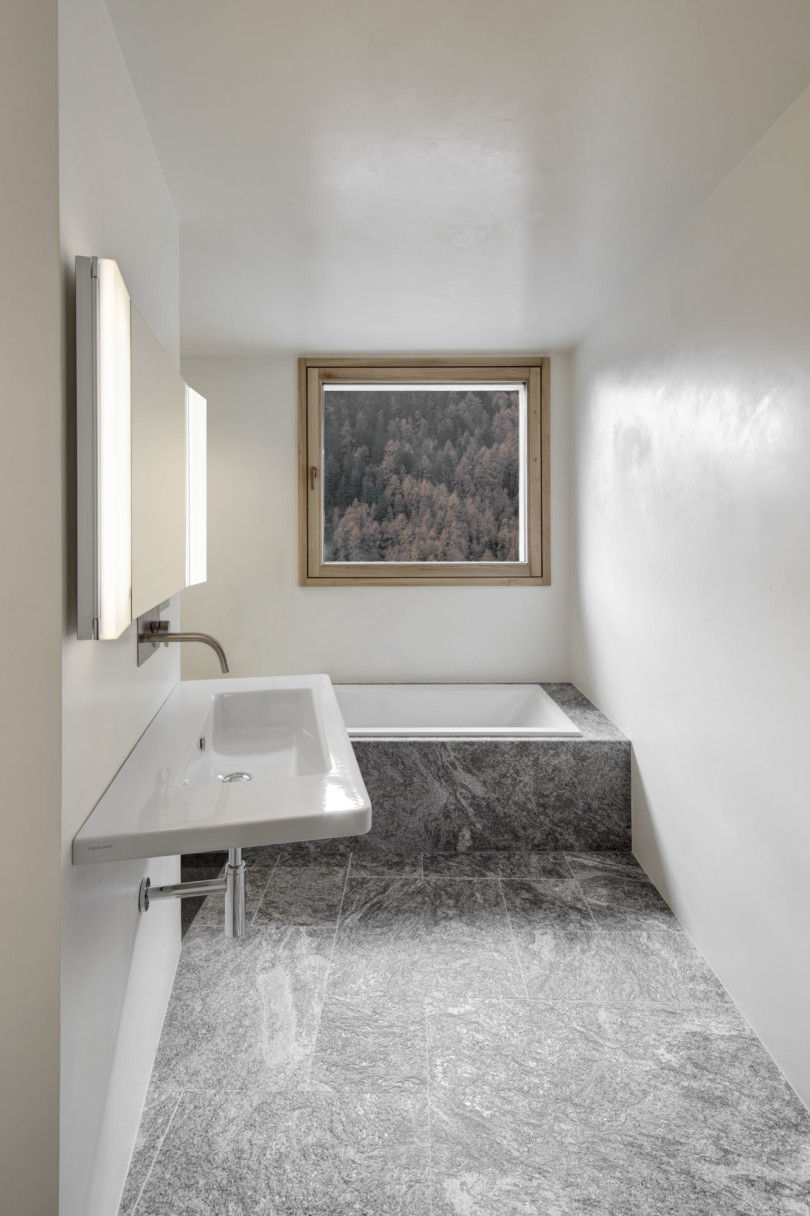 “Situated near mill creek, on approximately 2828 feet above sea level, the single-family home presents itself with the elegance and serenity of a small mansion. In an apparently self-confident manner the white monolith rises from the site, whilst the building design corresponds to the insistence of the client for a small but prestigious residence.
The volumetric and monolithic basic principle was emphasised by the exclusive usage of the white exterior rendering, of which the general raw materials are a compound of local sands, chalk and white-cement.
Main focus lies therefore on the exterior’s elementary colour, nuances and slight divergences were solely achieved by aggregates to the plaster. In detail the facades surface was moulded rather roughly, a fine characteristic which was achieved by out-sluicing with the aid of wet sponges. Sensitisation is in the eye of the beholder.
Since only by the presence of light and shadow, which is performing its everyday play on the coarse-grained surfaces, the building can utterly unfold its exemplary visual dynamic. The rising silhouette of the roof gives a slight impression of the upward striving space sequence on the inside.
Square shaped window openings in different sizes are referring every now and then to significant spots in the surrounding alpine landscape. The vertical facade descends sheer homogenous into the deep and slightly slanting embrasures of the window openings or even into the rooftop.
All windowsills and the canopy, which were conducted in exposed concrete, but also the handcrafted roof tiles, were made from the same compound as the plaster and provide its direct context.
The internal space arrangement was displaced half-level wise, reaching from the cooking & dining zone at ground level, passing the private areas in the core of the building, up to the generous living room in the attic.
Surfaces in the interior admit their reluctance, yet with the character of a sophisticated independence, increasing not only the value of the space, but also of all applied and handcrafted materials.
These are mostly passeirer gneiss, blacksmith’s bronze and manually processed elm wood, the latter has also been used to manufacture windows, doors, the staircase and individually designed furniture. Nevertheless are the components of the internal plaster once again a blend of chalk and selected marble sands.
A thin-layered plaster, which was afterwards smoothened, features the interior and introduces, accompanied by its reduced elegance and harmonious interaction with light, a warm and homely atmosphere.
In terms of sustainability and energy-efficiency, the building was awarded by the Casa Clima Agency with the low energy Casa Clima B class certification. Casa Clima buildings exhibit optimised construction methods, careful execution and a high level of comfort.
In order to be qualified as Casa Clima B category, a building’s heating energy consumption has to be within the spectrum of 50 kilowatt-hours per square metre annually, which would also be known as “five-litre” buildings for their theoretically energy consumption of 5 litres of oil.” 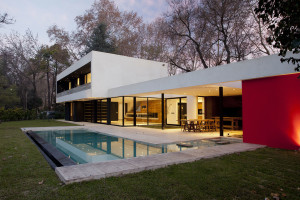 This modern weekend house was completed in 2013 by Enrique[...] 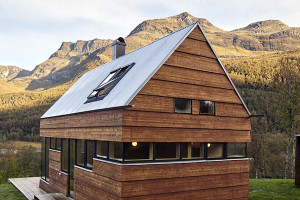 Cabin Laksvatn was designed by Hamran/Johansen Arkitekter as a modest[...]