G House is a sustainable single-family house builded with 100% recycled materials. This house is located in Talagante, Santiago Metropolitan Region, Chile and was designed by Ariel Furman + Daniela Garcia-Huidobro. 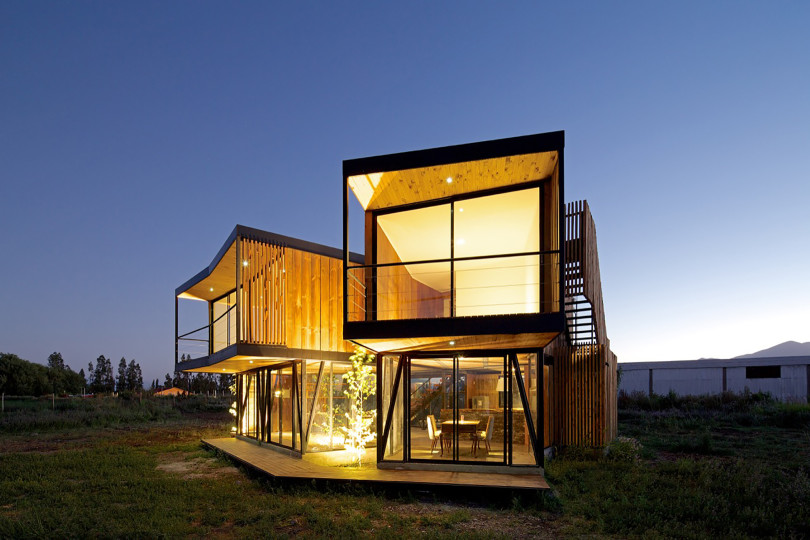 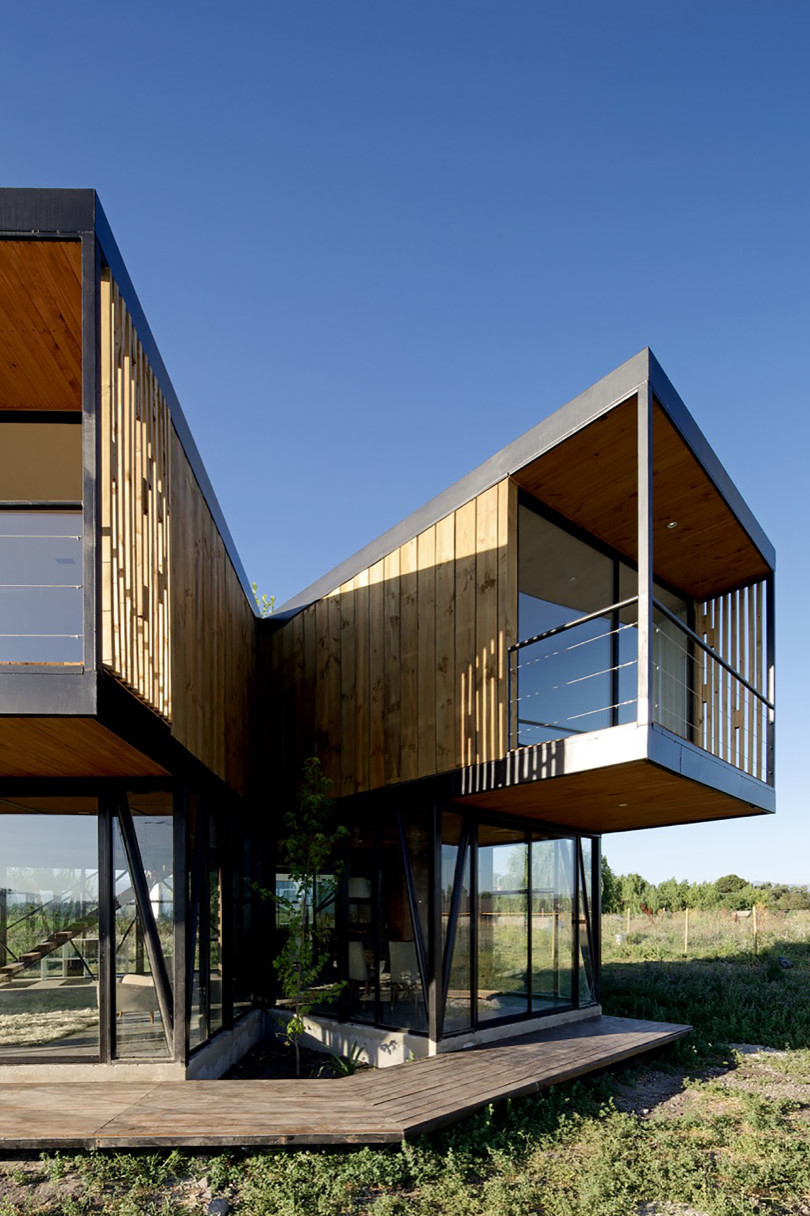 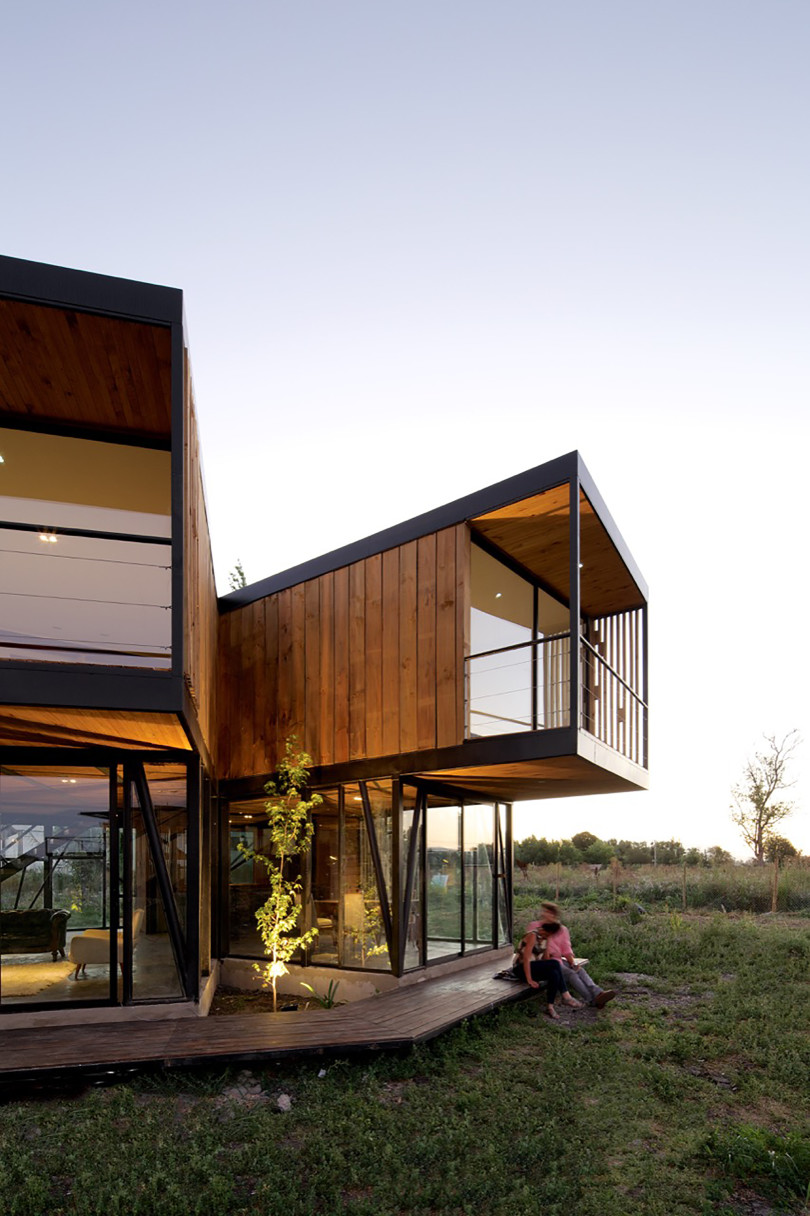 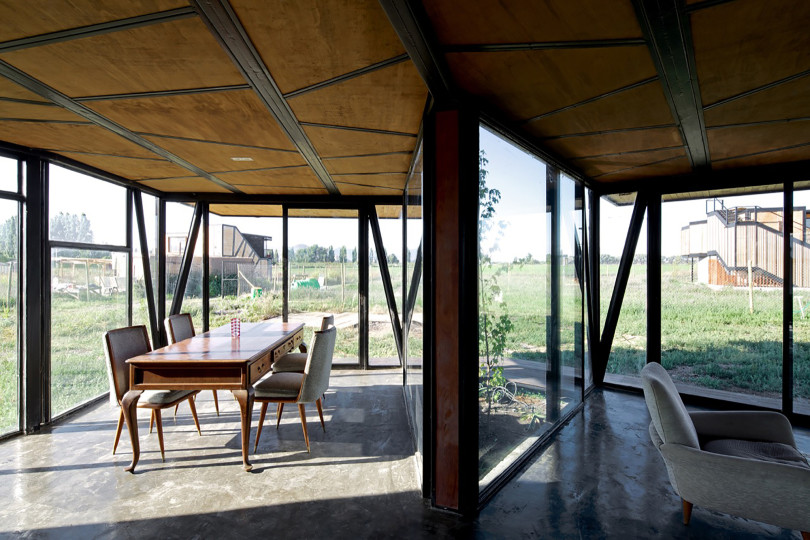 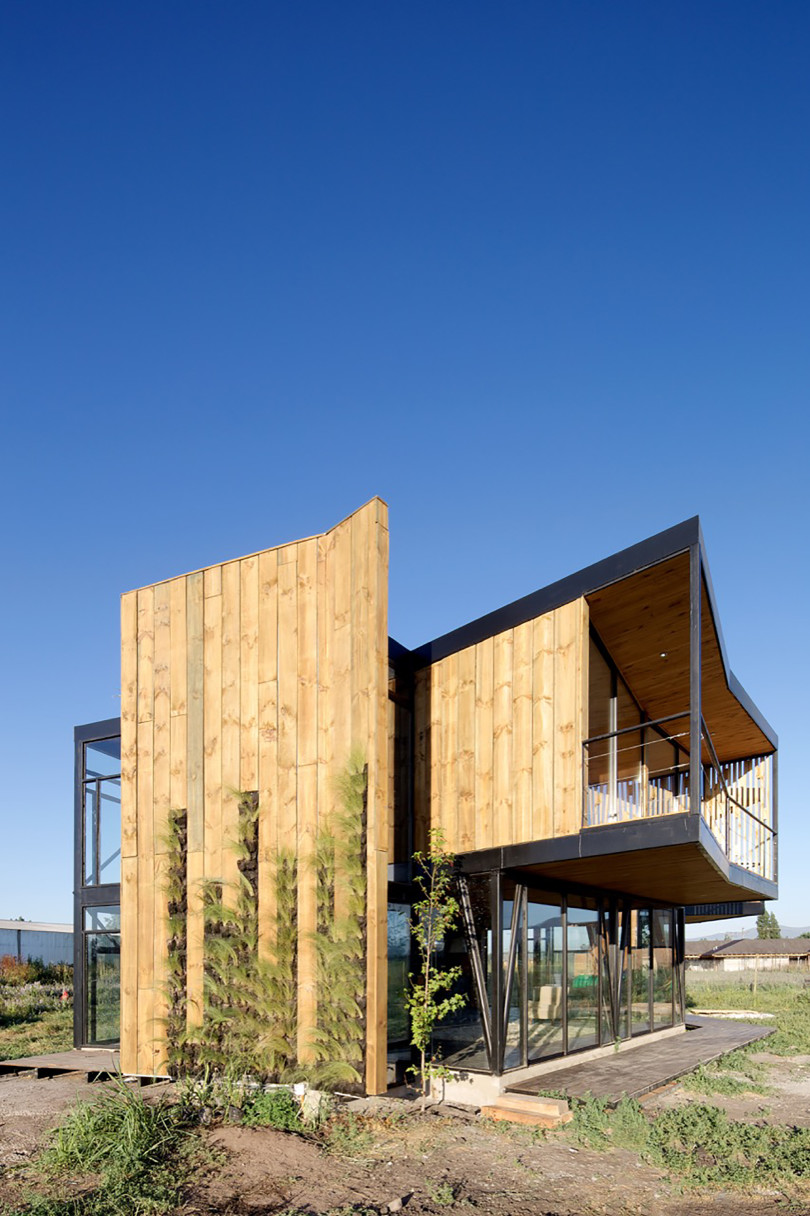 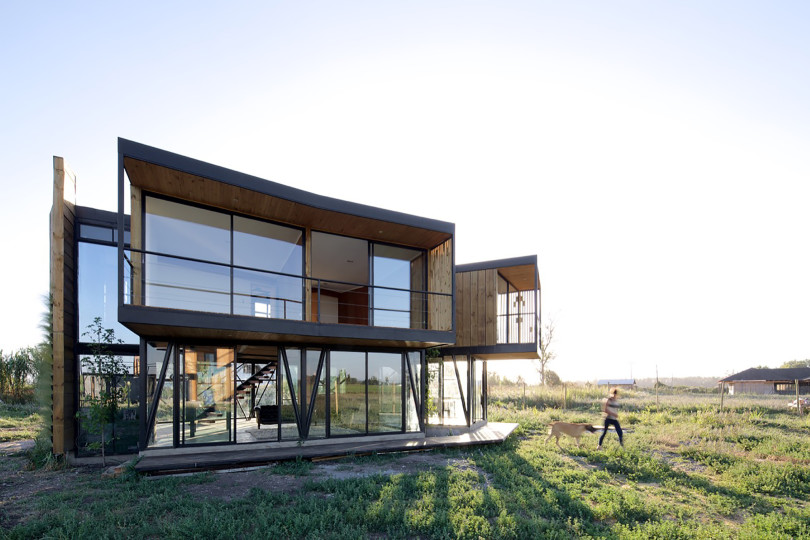 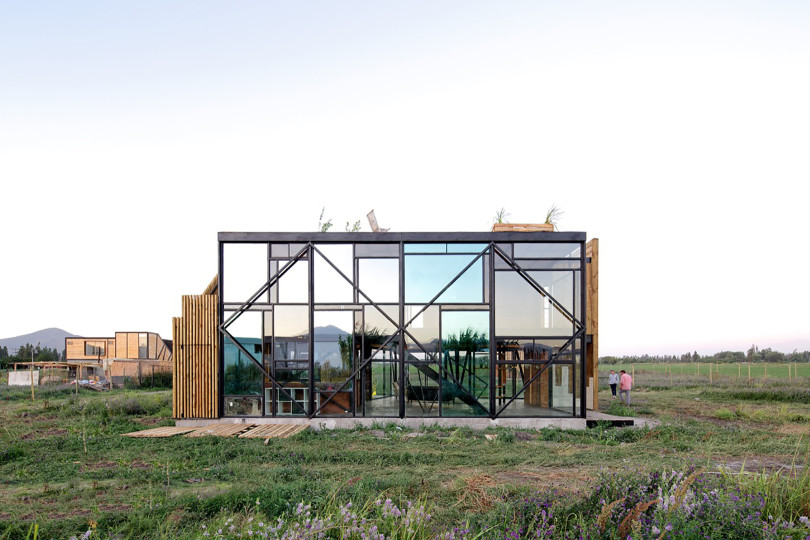 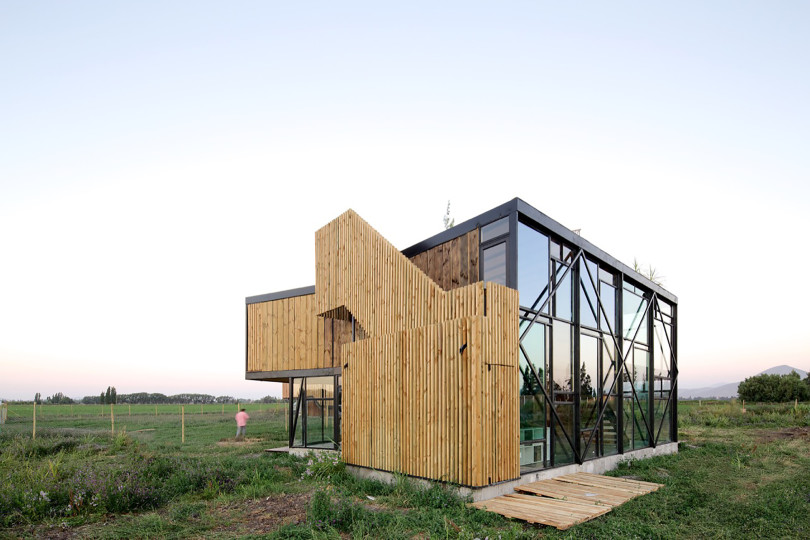 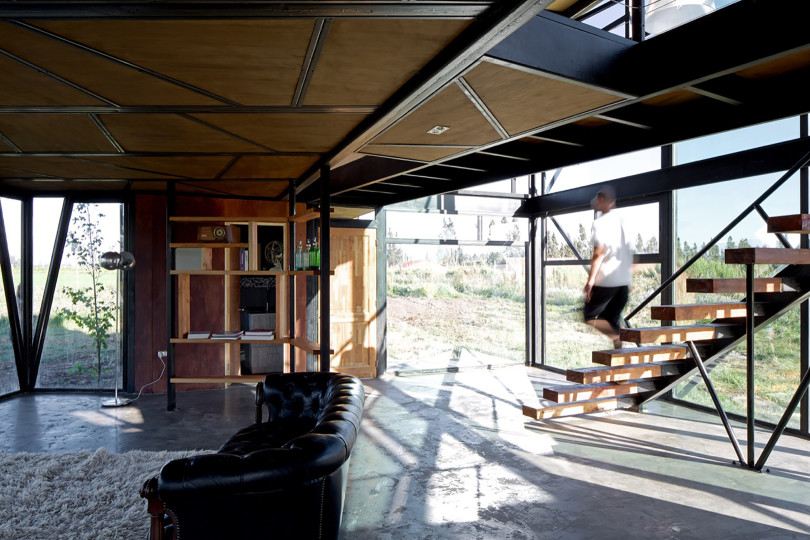 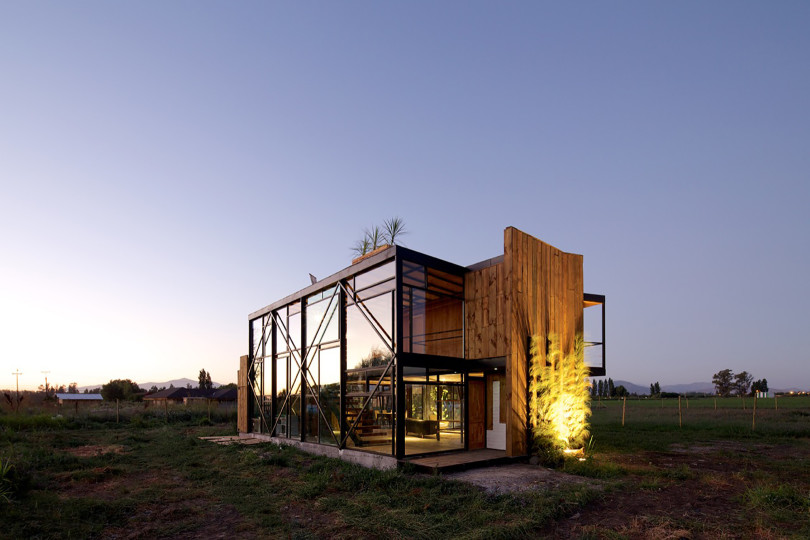 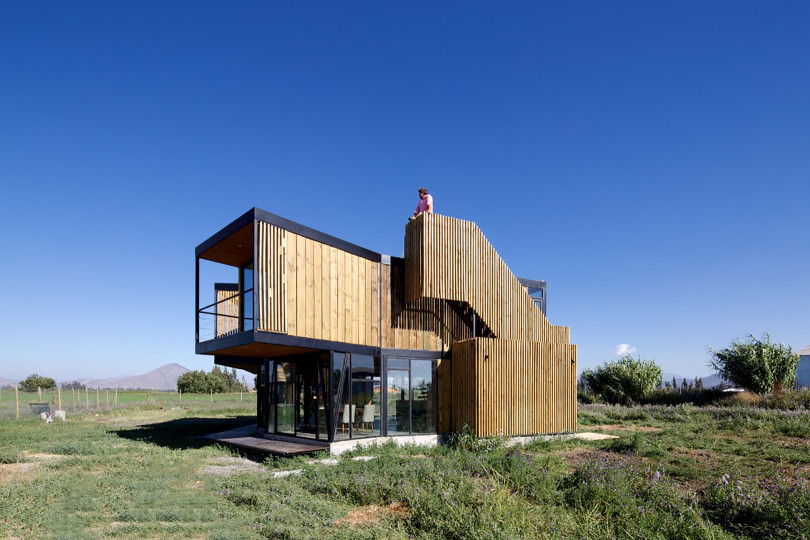 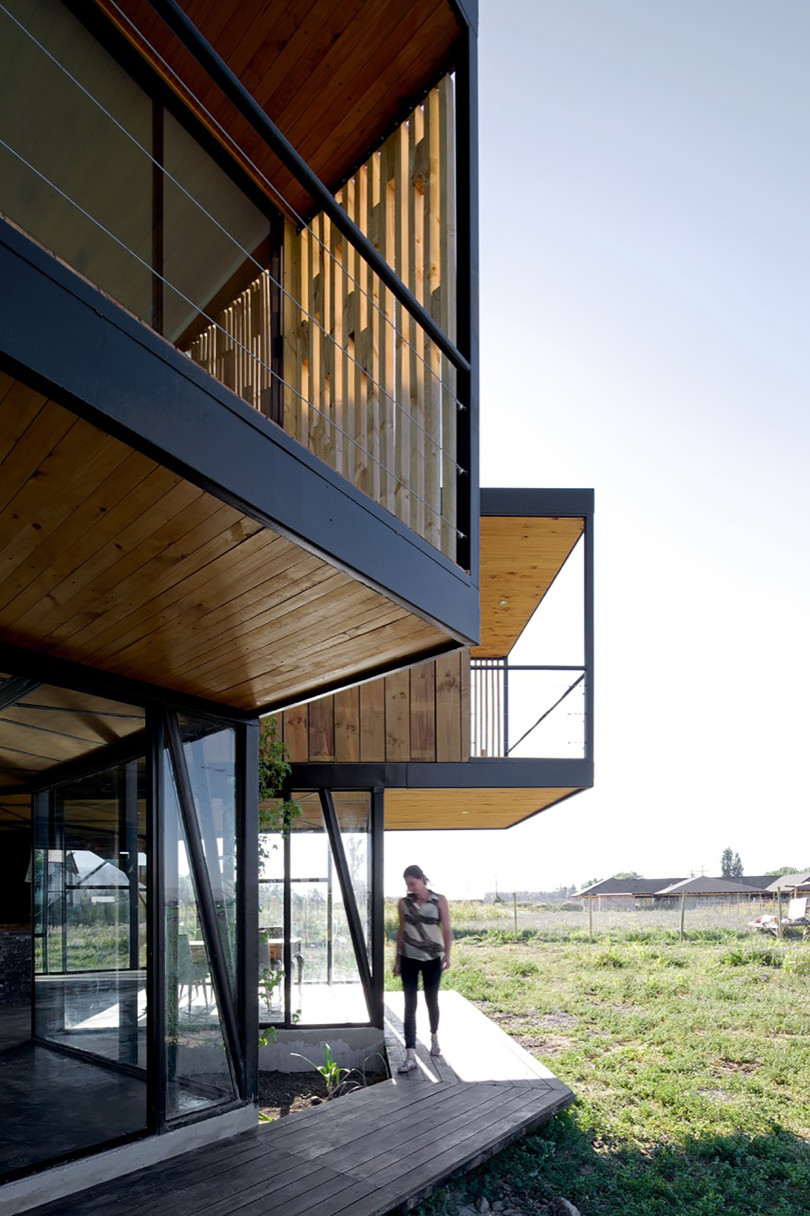 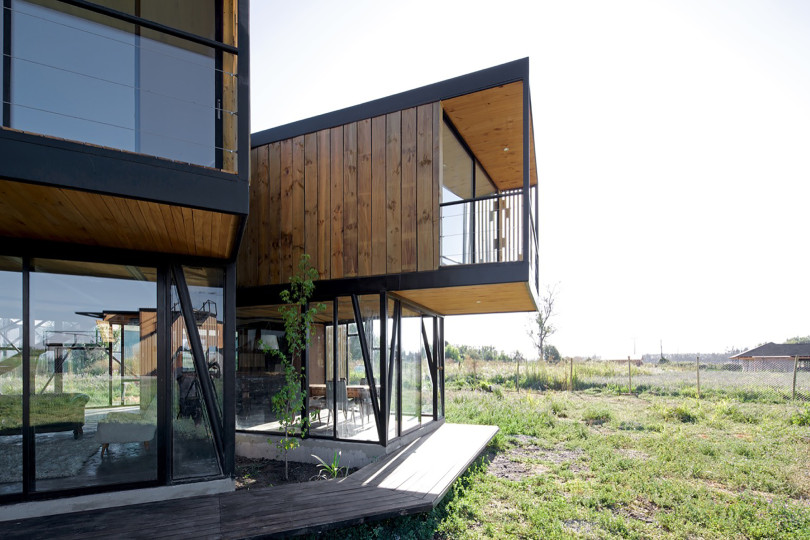 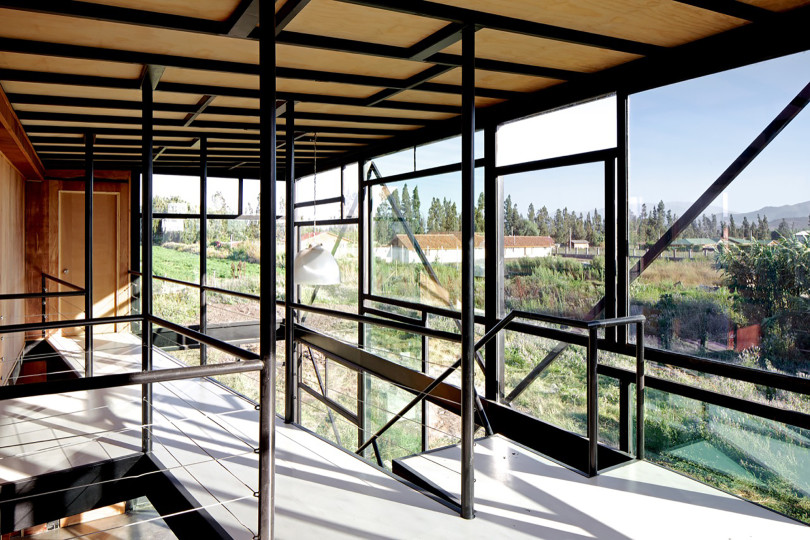 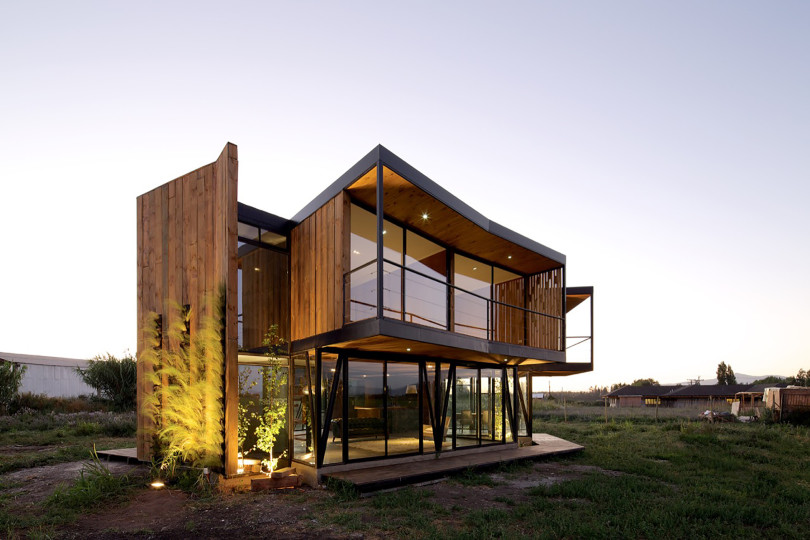 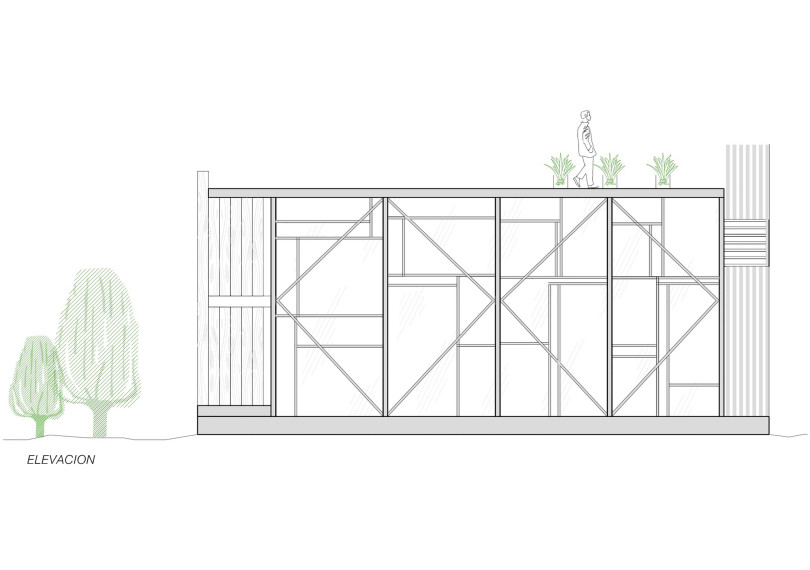 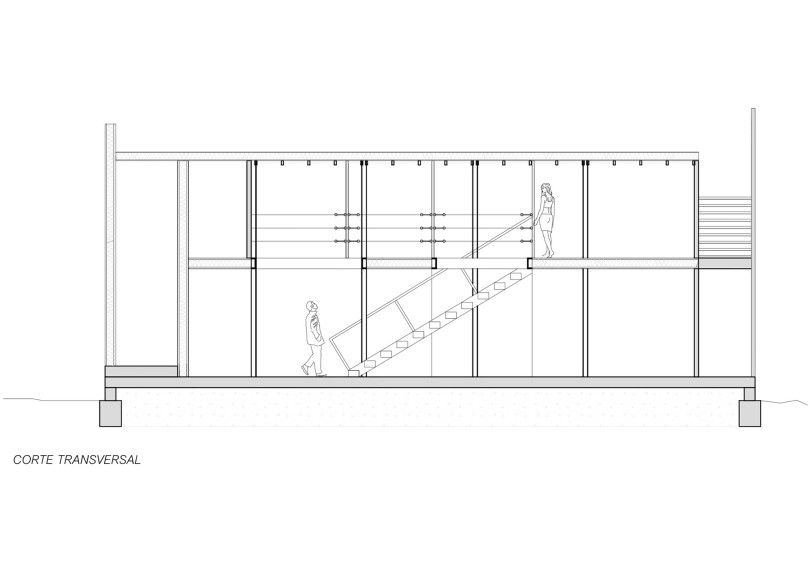 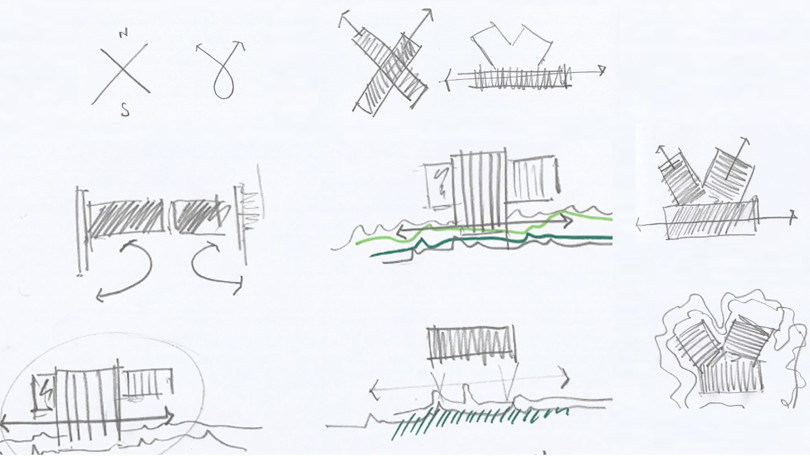 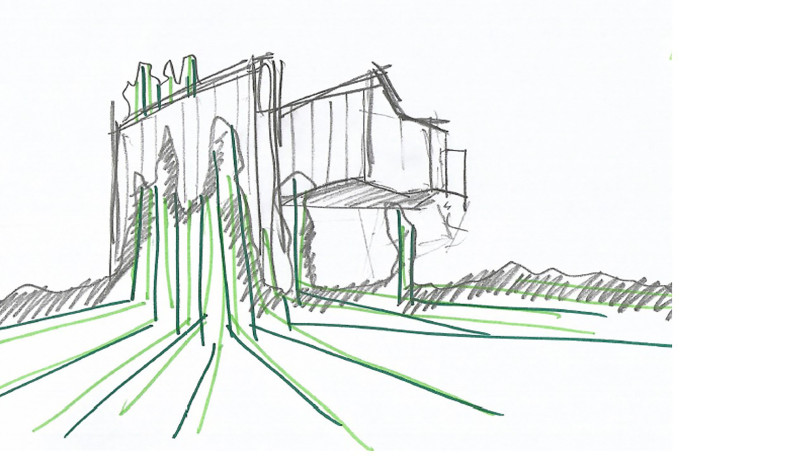 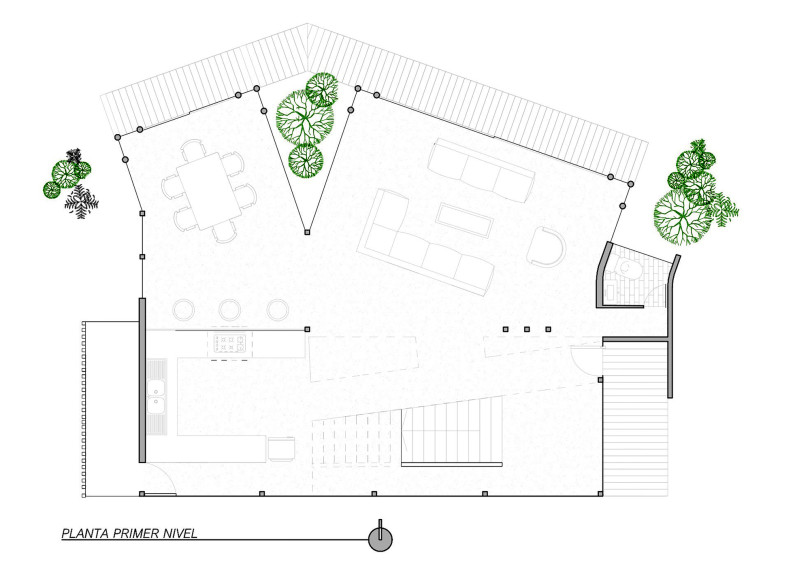 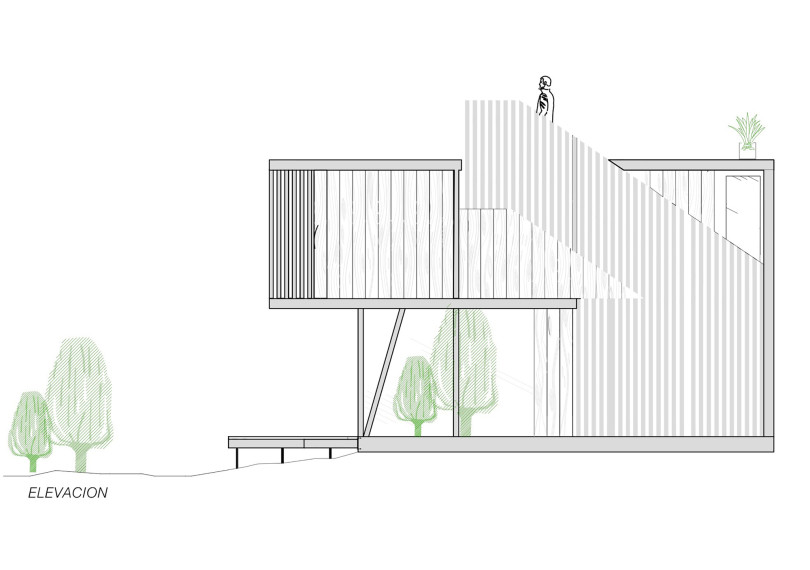 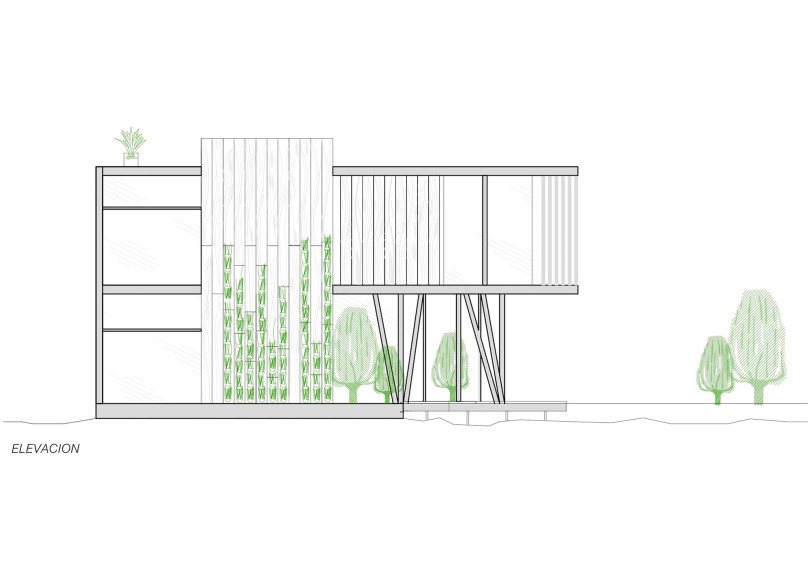 “Sustainable work structure and coating built on 100% recycled materials.
The work develops in a 27,000 ft2 land, located in Talagante, Region Metropolitana Chile, immersed within an rural extension, in an area rich in farms and with extensive landscapes with long-distance views toward NE and NW, in a land with no slopes.
The assignment consisted in making a single-family house, with usage of recycled material. Available were C and IPE beams and different dimensions of double glazed window.
Considering the rural area where the work is carried out, an archetype which lays in a integrated, harmonic and non-invasive fashion was opted. The grounds were constituted under the premise of transferring segments of green into the dwelling.
The main idea was based on the creation of a first floor that was fully glazed and permeable to the outdoor, composed by three mail spaces and organized to become three main distinct functions: kitchen-dinning room and living room.
On top of this transparent base, a second floor was placed; positioned in a suspended fashion. The latter is composed of two main elements strategically oriented, which open both towards NE and NW with the idea of capturing most of the skylights and views.
For the façade south, the available materials gave rise to the possibility of composing a large glassy surrounding, which promotes a continuous cross-ventilation between the N and S facades, and encourages skylight for the vast majority of indoor spaces of the dwelling, through this large curtain wall.
Embracing the ample spaces provided by the immediate surrounding in which the project was developed, the utilization of the roof or fifth façade- a viewpoint of privileged landscaping was unquestionable. For its construction, reinforced fencing that resist installation of available pallets, which will lay on the roof coated with zincalume type sheets.
With the clear aim of attaching the dwelling to the land in which lays on, and with the ambition to initiate a dialog with the green surroundings, for the exterior facing vertical green walls covered by vegetation similar to the one existing in the site was opted.” 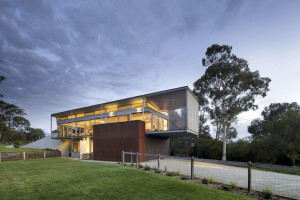 The Rest House was designed by Tim Spicer Architects and[...] 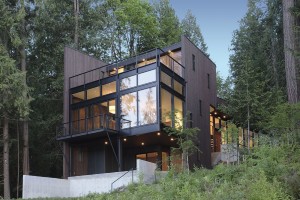 Flowing Lake residence was designed by David Vandervort Architects for[...] 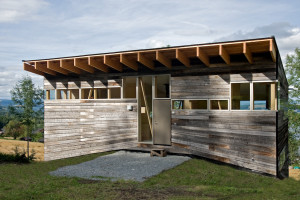 This wooden farm house is located in Toten, Norway, overlooking[...]